A is for Asparagus

In my pursuits to start asparagus last year I searched online(of course) for pictures of what it looks like growing. I was very disappointed to find very few NW gardeners with asparagus exploits. I found 1 long since updated Seattle blogger, and mostly asparagus farms from warmer regions.
I couldn't understand why--I thought maybe it does not grow well here, but all I read said it should do just fine!
Obviously in the later years I will be eating the asparagus instead of having photo shoots with it.
As it turns out, it is very hard to get closeup shots.
Here is the majority of my asparagus:
Not much to look at really.
We have a neighborhood dog who is blind and to keep her from playing Godzilla-we added twine and stakes was an afterthought.
I had 30 octopii roots to plant and could only fit 22 in this bed.
Either they were going to die or I could put them in some other place with unprepared soil--so I planted some under a tree in the south garden(to be).
Surprisingly enough, 4 of them grew, a bit later than the others, but this guy below is almost 3ft tall!

I look forward to being able to eat some next year!!
This is the best I could do upclose--
This year we are eating a ton of salads.
I harvested this on a Friday night and it completely filled a sink!
Lasted us and a friend a full week of salads every night!

I filled another grocery sack a few days later for another friend and the lettuce was unfazed!
Unfazed!
Here is my first broccoli. His name is tasty. Not a pretty plant to grow, as we have the bed covered with  row cover. White sheet stuffs that lets in rain and light, but keeps out cabbage moths.
So far so good, but maybe I should check it again today?


The plants takes up a lot of space for a few bites really.
Maybe I am destined to buy broccoli at the grocery store.
This is a small plate.
I  have my first cherry tomatoes starting! I planned on planting less plants this year, but it may have become just 2 less plants than before... last year we had 17 or something crazy like that(my crazy gardener brings them and I have a hard time saying no) and I didn't have a single one die on me which I was fully planning on!
So this year, instead of 3 rows for spiders to make homes, I only have 2! 6 plants per + 3 cherrys loving it up in a big pot... Oopsie!

First pepper! I planted jalapenos, cayenne, habanero, this one I forget, and some new ones I have never tried. I really wanted Ancho but couldn't find any starts anywhere.

I have NOT been minding my Peas... I forgot to tuck them into the twine early on and they have become a monster! So it is definitely not pretty, and I have lost a few while trying to wrestle these to keep out of the paths, but maybe a few less peas won't hurt us.


I have really been slacking on my garden photos. Why? It is too big to photograph! I cannot get a shot of the full thing from any direction I have tried. Even from upstairs!
So either we will just have photos of specifics, or the left and the right sides.
Here you cannot see the tomatoes on the right, but you get everything else.


I have 14 new types of flowers tucked into the edges of each bed. Each has a tag and I have yet to learn them all. daisies, zinnia, iris, stock, yellow ones, smelly ones, begonias, white ones, black eyed susans, hollyhock. I may have to photograph each one and make one post just to learn them.

So far these are the only 3 photos I have taken.

The Iris is gorgeous, so that is no wonder.


These daisies, I trampled and broke some stems, so now I have a little vase of them at work.


And this is just glorious. It is growing up the poles now quite rapidly. How did I not know about Black Eyed Susans before now? Orange has always been my favorite. You will surely see more pics of this


I am almost afraid of the garden it has grown so large!
So if you don't hear from me in a while--you know where I will be!
Edit:
Last night I found tons of aphids all over my kale and collards! Eeeek. I started cutting off the offending parts, but taking a look around they have got to almost 1 full bed! What do I do?
I stopped my cutting(clear cutting!) and decided to give it a day to research. Will just spraying them with water make them go away? or would they just land in the soil and climb(hop?) back up?
Little gray/lavender buggers are creeping me out!
Posted by xoxoxo at 7:19 AM 5 comments:

*MIA* but above ground!

I sure miss this place--I am buried under a to do list a mile long! So much so that I skip looking at the list often and just do what is in front of me. No time to write, think or read blogs makes me sad.

This is what our move upstairs looked like:
﻿ ﻿ Unplanned and messy!
We did not have any boxes. We didn't even have any plans to move upstairs when the carpets were cleaned at 8am. But 5pm rolls around and our ever trusting friends came over for a BBQ and in order to keep them busy--well... everyone just grabbed something and up we went!
We have the best friends in the world! We finally fed them (BBQ Chicken & Steak with salad from the garden) at 9pm and sent them on there way tired and full.

So, this week has been a bit like moving in. Where is my hairbrush? Where is my coffee cup? Where are my car keys? Travis even lost his belt for a few days-ha!

I STILL have not finished the kitchen cupboard doors! Shhh. I should be working on those instead of writing  this! The cotton in the air is NOT helping me get to painting. I have to keep the garage doors closed to keep the area sanitized and I need to keep them closed while they are drying..
Meanwhile--the bases of the cupboards are good to go and the doors are not keeping me from moving in to the kitchen! My current mission is to fill them up in an orderly manner that doesn't have me turning in circles just to make a cup of coffee.

I will however post some random updates about the garden this week!
Posted by xoxoxo at 11:09 AM 2 comments:

This song likes to follow us around so I thought it would be fitting to play while reading.. It seems we have been living in a twilight zone episode for the last year. We keep working on the same projects day after day after day after day yet never finish. Our own personal hell of unfinished projects.....

Capital B is right!!

We stopped counting weeks ago at 120 hours on the ladder.

It only took a year longer than the 2 months planned.

And he won the bet. He finished the beams before I finished the kitchen cupboards.
Though I didn't start til November it had become a competition.
(Secretly I let him win)

Never fear--the kitchen is just a few days from done !! 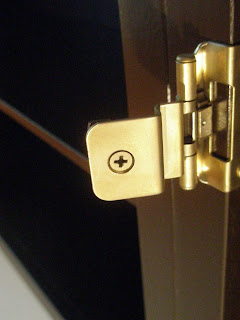 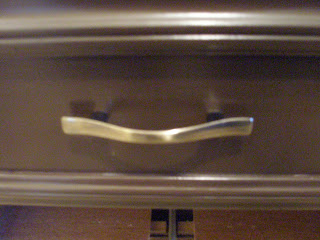 Here are some lovely pictures of the work

We didn't need to stain after all. The Benite (wood conditioner) worked wonders! From Daly's in Bellevue.
This process caused Travis to YELL for me downstairs.
AAaaaapppril!!!
I thought he spilled the conditioner($50/gal) or fell from the ladder he yelled so loud and urgent.
Turns out he just wanted to me to see the miraculous change in color. It really was important!!
After all the sanding, the wood had really lightened up to a kinda blah, so this color is nice and refreshing. 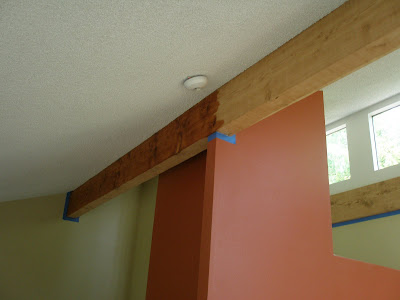 The stain color we had picked was 2x cherry (meaning 2 coats) and here you can see the test board next to the beam. No need! Suddenly they were Done! 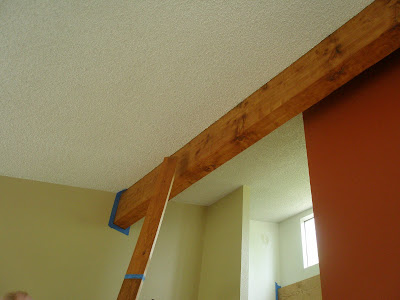 We will never be as intimate as Travis with these beams in the 14 months he romanced them, as he has touched every square inch many times. Every nook, cranie and splinter! 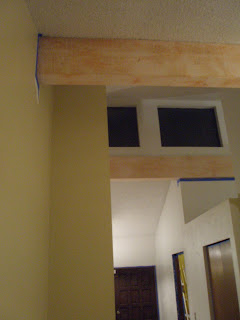 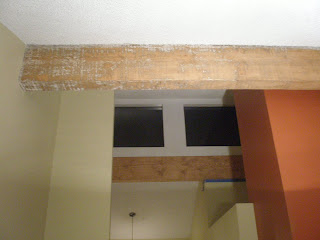 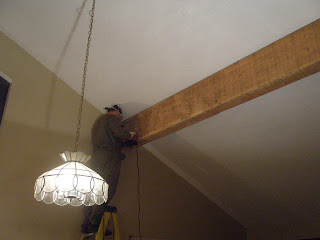 picking paint out of knots... 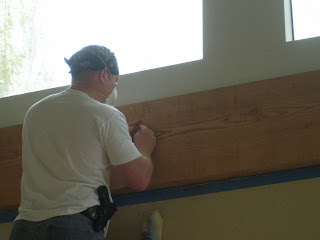 and then light sanding again....


And then the fun part:
painting on conditioner
2nd coat of conditioner.

I'm sure I am missing a step somewhere... but he hasn't chimed in with his first hand experience for me to post..
Anyway--maybe these pictures can help us get to know the beams better... 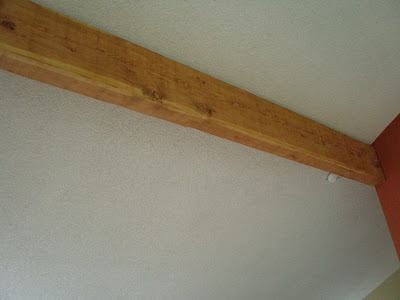 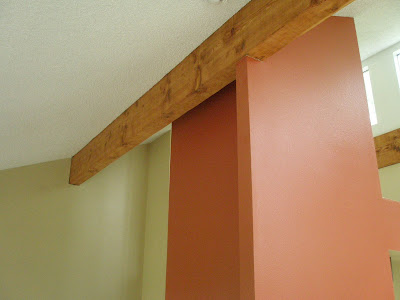 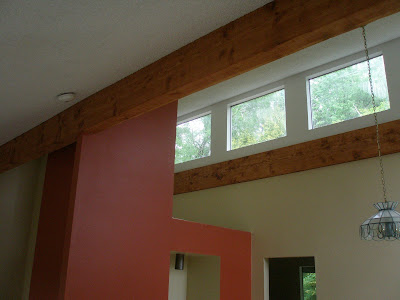 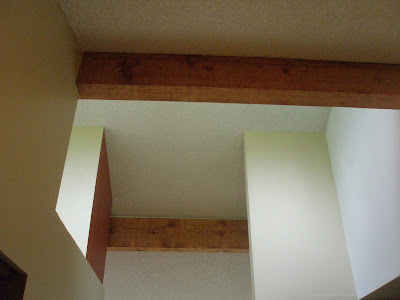 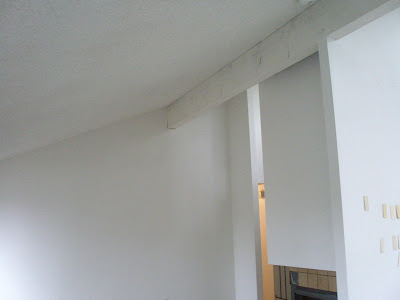 This man never stops--he is 1 day post beam and he is already suited up again... 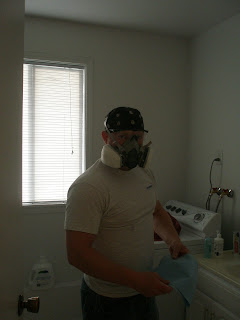 This time to remove the asbestos laden popcorn ceiling downstairs!
This hallway was the only spot with it down here (yes, I am still writing from the basement)
Upstairs we will tackle one room at a time in the coming year(s) 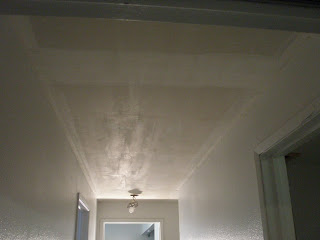 Only took 2 hours from prep to clean up and now we get to paint!
Meanwhile the carpets are being cleaned upstairs at this very moment

so we will be moving things in the next week!
Yipppeeeee!
Posted by xoxoxo at 9:35 AM 7 comments:

That's what she said

Things I talk too much about 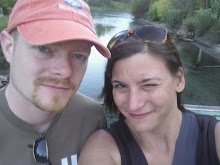 It's All about us

xoxoxo
Bothell, Washington, United States
Travis and Aprils' 1st house! This IS the house that LOVE fixed. (Travis does not approve this comment) We are also learning to garden in the rain and enjoying it.